Kristina Leipold is a German native who worked and lived in Singapore, Beijing, New York and is currently living and working in Berlin.
She is the publisher of the highly regarded Berlin Design Guide and at the forefront of Design Trends. She is continuously scouting
the world for the latest design ideas. Today she works on the next edition of the Berlin Design Guide and is on the search for new hot spots and design locations in Berlin.

Over hot chocolate I discussed with Kristina design and marketing and what’s next. So let’s hear what she has to say.

What is influencing design in Berlin today?

Berlin is a very dynamic and vibrant place constantly in transition. The city’s openness and appreciation of eclectic lifestyles in addition to vacant urban space and comparatively cheap residential rents attract creative minds from all over the world. First came the artists, then the entrepreneurs. More new businesses are started in Berlin than in any other German state. The history shows the city as a laboratory of living, something that is still in the air today.
Berlin is also a very multi-cultural and diverse city. It has the largest Turkish settlement outside of Turkey. And walking the streets often Spanish and English seem to be the local language. All of this makes Berlin a very inspirational environment for design and designers. It’s a city also widely known as a place for design experimentation.

What are Berlin’s Design Secrets?

Sophienhöfe: Berlin is famous for its backyard culture and complexes. I especially like the Sophienhöfe where you will find art galleries, coffee stores and one of Berlin’s finest design stores, the Gestalten shop.

Buchstabenmuseum: A place that recognizes typography’s role in documenting changes in society, culture, business and the urban environment.

Pop Up Stores in Berlin. What works what doesn’t?

Pop up stores are a very popular way in Berlin to showcase and sell products over a limited period of time. Important are location, concept, people and the product of course. There are various e-zines, newsletters and blogs which work perfectly as communication channels.

Must see things in Berlin?

Boros Collection
Christian Boros’ contemporary art collection on 300sqm is housed in a former WWII bunker with a colorful history, having served as a cooling for tropical fruit in the GDR years and a location for S&M parties in the 1990s. The collectors live in the penthouse built on top of the building.

Tempelhofes Feld
It is a former airfield built by the Nazi regime, larger than Central Park in NYC, now turned into a public space and extremely popular with the public.
It is a very exciting space, both to visit and from a scientific viewpoint, as it addresses the issue of what ‚public space‘ means to the community.

Karl-Marx-Allee
Spanning 2.3km from Alexanderplatz to Frankfurter Tor, the majority of East Germany’s answer to the Champ-Elysées is lined with the so-called ‚workers‘ palaces’, nine-story neoclassical apartment buildings conceived to show the world that even ordinary citizens of communist East Germany could live at the country’s first address.
Don’t miss some of the iconic entertainment venues nearby: Kino International cinema is one of the city’s best movie theaters, while former cosmetics Salon Babette is now a bar and venue for art exhibitions.

Gendarmenmarkt
The Gendarmenmarkt is the most beautiful square in Berlin Mitte and the site of the Konzerthaus and the French and German Cathedrals built in the seventeenth century. Very popular with tourists but still worth a visit.

Neue Nationalgalerie
The New National Gallery, one of Mies von der Rohe’s final designs, opened its doors to the public in 1968 as the ‘gallery of the 20th century‘. The minimalist pavilion is often described as a ‚temple of light and glass‘. From 2015 the building will undergo substantial refurbishments by none other than British architect David Chipperfield.

Berlin – the Capital of Coolness. How does Berlin stay relevant to that promise?

I think Berlin’s contradictions are a big part of its appeal. Finished and unfinished, beautiful and rough, quiet and loud, Currywurst and 2**-Dinner etc. Every day can be different and you can choose over and over again how you’d like to live your life. Berlin needs to make sure that this will continue to be possible.

Kristina, what are you favorite Restaurants in Berlin and why?

Markthalle Neun – a farmer’s market and food stalls in a historic market hall which offers a wide variety of local, organic and fairly produced products. Potato soup, Brazilian snacks or oysters and champagne – always delicious and a nice experience. 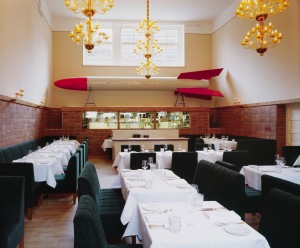 Pauly Saal – a 1*-restaurant offering German cuisine at its very best located in the Former Jewish girls’ school in Mitte, a cultural destination featuring branches of prestigious galleries. If you have some extra time take a drink at the bar.

Long March Canteen: As good as it gets for Chinese food in Berlin. Authentic flavors in a  contemporary setting.

Soup Populaire: Star cook Time Raue offers Oma’s classics such a Königsberger Klopse in a post-industrial baroque setting tucked away in the barren-looking yard of the disused Bötzow-Brauerei. For your digestive change to the attached bar „Le croco bleu“.

What did you Google last?

Cheap flights in February leaving Berlin going somewhere warmer and brighter. I love the city but its winters are long, dark and cold.

One Response to Berlin “Poor but Sexy”