24 Hours with Kathy in Miami

Home of the three-oh-five (305) area code, the strongest coffee known to man, and millions of Latin-American expats, Miami has also been home to me for the past 15 years, so I think I can give you a good virtual tour of the city. I’d say “Shall we?” but this also happens to be the birthplace of Pitbull, so a more fitting “Dale!” is in order.

Miami is one of the most diverse and inclusive cities in the U.S., due to its high population of immigrants, mostly coming from Caribbean islands and South America. The biggest “minority” concentration though, is undoubtedly of Cuban migrants, who started fleeing their island in the 60s and have since made Miami a second home. With them, they have brought their culture, their music, and most enjoyably for the rest of us – their food.

While the rest of

the country wakes up to Starbucks, many true Miamians make their way to Versailles Restaurant, a staple of the city since 1971, located in the most Miami street to ever be: “Calle 8.” Translating literally to “8th Street,” Calle 8 is the main landmark of “Little Havana” in Miami, and whether by its colorful installations or by the smell of Cuban coffee – “cortadito” – at all hours of the day, you can’t miss it. (If you’re doubting the strength of Cuban coffee, comedian Ralphie May will set you straight.)

Now that you know where to get your morning fuel, I should warn you: Miami has recently been ranked as the 10th most congested city in the planet, with the second most stressed-out drivers in the country. So, leave early, and if possible steer clear of the “perpetually in construction” 826 (Palmetto) and 836 (Dolphin) highways!

If you’d like to get a head start on your Miami tan, make your way to South Beach and stick around the area on 7th St. and Ocean Drive. It’s right by all the beach-front restaurants and you can also make multiple trips from your sandy spot to and from Wet Willies to stay hydrated during your beach day.

Now that you’re a little more tan and ready to explore, it’s the perfect time to enjoy the Miami weather and walk around. Wynwood, our newest neighborhood explosion is a great choice, as it’s filled with top-notch restaurants and art, LITERALLY everywhere. The outside walls of most if not all the buildings in Wynwood are commissioned to artists throughout the year that leave their mark on the spaces, which make incredible backdrops for show-stopping photos.

Another option if you’d like something a little more quintessentially Miami, rich in as much history as it has gastronomy, Miracle Mile (24th street in Coral Gables) is your place. Featuring dozens of restaurants, bars and stores, you can’t go wrong with a little walk down these streets. The trees arch above (and it’s especially beautiful during the holidays with all the lights) and the calmness of it all is just picture-perfect. The area is surrounded by historic buildings and it’s extremely centric to all the major Miami neighborhoods. Craving tea? The Biltmore Hotel has afternoon tastings with pastries and all!

You didn’t think I forgot lunch, did you? If you’re still in Wynwood, SuViche (a Peruvian/Asian fusion restaurant) is a big fan favorite. For those that made their way to Coral Gables, Eating House is a must, but you also must make reservations. 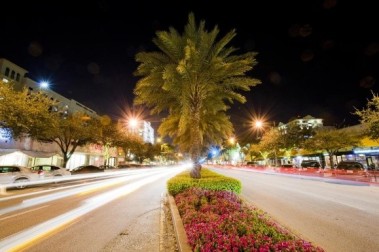 It’s dinner time already? Almost, but first: Happy Hour! When it’s four o’clock in Miami, the city’s restaurants, lounges and bars get ready to welcome workers from all industries and jobs alike to enjoy their specials at half the price, and sometimes even better deals. If you stayed in Miracle Mile after your shopping spree, feel free to stop in at Tarpon Bend, Copper 29, or almost any other establishment on the street. This spot is the perfect choice for Happy Hour, as you can go somewhere different every day.

Dinner spots abound in the city. Coral Gables, Wynwood & South Beach all have great options, including the ones already named, so let’s go somewhere new: Brickell. The downtown, all business, New York-esque area of Miami has a huge selection of restaurants both autonomous or in hotels. Take a stroll by the new Brickell City Centre, and whether you’re feeling the Italian vibe at La Centrale (NYC Eataly Style) or you’re in the mood for Tacology’s Mexican taste explosion, you can’t go wrong!

Even though you can do most of these things throughout the week, you will find them all especially in high attendance during the weekend. Miami has a little bit for everyone, including:

Have I run out of time already? 24 hours in Miami are definitely not enough, especially with so many seasonal experiences, but I hope you got a taste of this melting pot of people, cultures, and palates, as unique as they come to be!

2 Responses to 24 Hours with Kathy in Miami